Sometimes the things that need to be questioned the most, are the things we feel we’re least able to question. The parts of the education system that carry the guise of being ingrained, natural, and untouchable. Things that have “always been” and things that will “always be”.

But if we really want to pursue more agency for students and shift the current paradigm of education, then maybe these are the very things that we should be critically questioning, challenging and re-imagining.

Sometimes this is difficult to do because these human-created systems have seemed to almost calcify overtime to the point where it’s hard to figure out how to remove them, or change them.

But if we ask ourselves George Couros’ famous question…

… with the intent of creating a place that respects and supports each student’s agency as a learner and a human being and supports the processes of learning as they naturally occur… would those elements and structures be part of the design?

How can we stop seeing these elements as untouchables and start having critical conversations about:

the purpose they serve, or perhaps don’t serve…

the way they support learning, or perhaps inhibit learning…

the way the help students flourish, or perhaps prevent students from flourishing…

the impact they have, or perhaps their unintended side-effects...

I’m not saying that they’re all bad (or that any of them are bad) I’m just saying that making an informed choice as an education community about the structures and systems we choose to have to support learners and the process of learning, is very different than passively accepting elements of the educational paradigm that have been passed down, or passed off as “untouchable”.

Which “untouchable” elements of the current education paradigm do YOU think need to be critically questioned?

Since the #IBSG2018 there’s been a buzz around disrupting school as it has been, by IB educators calling ourselves the “IB rebel alliance” provoked into action by Taryn BondClegg. Some of the big ideas that have brought some welcome, refreshing disruptions to the model of schooling come from Studio 5 at ISHCMC. The new blog Educator Voices and Sam Sheratt describe some of its exciting work.

In the wake of Taryn’s challenge to be “rebels not robots” and take action to redesign our schools, Sonya Terborg sent me this in reply to a comment that “Tiny disturbances can change the system.” 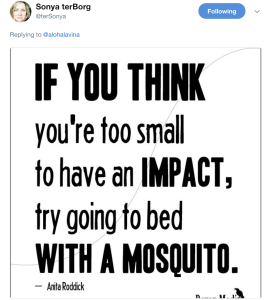 It may seem sometimes that when educators speak about the change that is necessary to bring voice, choice and empowerment into schools that they sound like annoying little mosquitos in the tent. A large slap could end that buzzing. As Teresa Tung explained it, an administrator’s “But…” could subdue or even extinguish teacher agency.

Large systems seem like daunting monoliths for a teacher to move. Like being a mosquito in a tent (watch out for that hand!).

Rosa Parks was one person. She was a tiny disturbance in a large system. Her one action of refusing to move from the white-only section of the bus led to the Montgomery Bus Boycott, a lawsuit, and finally a widespread awareness of social divisions.

Here’s another story about how one tiny disturbance changed an ecosystem.

Leadership from heads and teachers can result in a trophic cascade, a natural phenomenon in which introduction of actors in an ecosystem result in dramatic changes in the whole ecosystem.

To create those tiny disturbances, we do need courage.

Courage comes in many forms in our schools.

It’s the open-mindedness of a head of school to listen and work alongside teachers to make change happen in small or big ways.

It’s teachers who give themselves permission to experiment, iterate, fail, innovate, fail, persevere.

We have colleagues who let go of the comfortable and enter into unfamiliar ways of being teachers, leaders, critical friends.

We can have students who tell the director and the principal that we need to create a culture of reciprocity.

And imagine what might happen after a classroom of students have spent a year learning with an innovative teacher. Might they then expect of their schooling the same empowerment, engagement and ownership in their own learning? And how might the system have to respond?

Once you make the disturbance, the system cannot go back to the way it was before. It will adjust to the new and change in response to it. This is the power of one voice, one classroom, one rebel.

There are many disturbances in our systems, and many courageous rebellions are not necessarily large and visible. We honour them, the stars and the quiet rebels, all.

This post was originally posted in the author’s blog myptoolbox.com.