Originally posted in my blog https://empower2b.wordpress.com

Wow…so last week I was in a spin! Student led conferences are NEXT WEEK! As usual (as I am sure many of you can relate to) this made me shudder a little. You see student led conferences have always been a fine tuned production. The full week leading up to them is filled with whole class discussions in which I LEAD the students to remembering all the different tasks they have done, places they have seen and units they have studied. Once we have remembered everything it is time to make sure we have reflected…portfolios…are they done? Have the students been using their time wisely when they have had time to work on them? Then we finish the week with rehearsing. What are the students going to do and when are they going to do it? How will they explain it all to their parents? Will they show growth?  Will the parents be happy?

When I stopped and thought about all this I realised one very important point…none of this is about the students! None of it allows for me to find out what they think…what they are proud of….what they want to reflect on…what they want their parents to know. Isn’t the purpose of Student Led Conferences to allow the students to take their parents on a journey that helps them understand just a little of what their school year has been? How does this happen if I am the one telling them what the journey needs to be?

How can I possibly guide the students through a process that will do justice to what they have been working on this year? Phrases and words like “student agency”, “student directed learning”, “reflection”, “self-awareness”, “goals”, “scheduling”, “ownership”, “responsibility”, “accountability” and “growth mindset” are not just words anymore! They are part of the classroom vocabulary. The students use them to describe their school day and what they are doing well and what is a challenge for them. So if we have worked so hard on these things all year how can I change how I have approached “student led conferences” in recent years to reflect who we are as a class now?

Helping each other come up with ideas on what to share and how to share it? These two boys ended up coming up with a task that they would do together for their parents as they are scheduled at the same time.

Then a blog post is published about exactly this! On the Making Good Humans blog I read a post about “Upping the Agency is SLC’s”!!!  Woo hoo!!!!  Just what I needed! Once again Taryn is guiding me to the light that will allow my students to be in the drivers seat. I loved when she said “Instead of giving students our why for SLCs we supported them to come up with their own personalized why.” And she shared a template that they used. I had a starting point!

To cut the process down so I am blog friendly….The students have spent time discussing what Student Led Conferences are and why we have them. Why do they need to be the ones to take their parents? Why are they important? Then I asked them….if you could do them anyway you liked how would you do them?

Once again it surprised me how hard some students found this question to answer…what did I mean, how would they like them to be? Didn’t they have to do them all the same? In the end the students each wrote their program for their 40 minutes in the classroom. They had work out from the start of the year and were comparing it to now, they were preparing reading workshops that they had led their peers through so they could repeat it with their parents as the students, they were writing equations so they could do a number talk with their adults…the ideas they were coming up with were endless! And the buzz in the air was exciting! And one thing was clear…they were nothing alike! Every students plan was different to the others, both in what they were sharing and reason why they were sharing it. 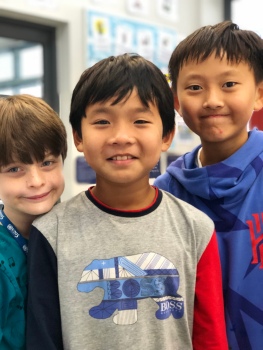 We are ready to go Ms Mel!

One student said he wanted to share a mistake he made…what this ok? The other students were surprised! Why would he want to? Isn’t he embarrassed? You see, we tell our students all the time that it is good to make mistakes but when do we give them the chance to celebrate them? Now was their chance! It became a challenge for some of them and pushed many of them out of their comfort zone but all of a sudden mistakes were being written into the program!

An example of the Student Led Conference program for my beginner EAL student.

As they finished they started talking amongst themselves about the differences between this years Student Led Conferences and those they had done in the past. Observations about the lack of “sameness” and the fact that there weren’t any “stations” set up were made. When we discussed this as a class my resident wise reflector said “You know Ms Mel I just feel like this is my conference, not just me doing what you want me to do. It is like our year has been!” Some asked if they could blog what we had done…all of a sudden they all were!  So, I asked them…convince me! “Convince me on the way that I should do Student Led Conferences next year with my class.” It was when I read these that I noticed how powerful the changes had been…

It is currently Tuesday afternoon and Student Led conferences are tomorrow. I am not worried about my students. I am not scared they won’t impress their parents or that their parents will be concerned about what they have learned. But more importantly I am not worried for individual students who are nervous and scared to show their parents. You see at the end of the school day today my students have left feeling PUMPED! They have smiles from ear to ear. When we had our closing circle time this afternoon we talked of being proud of our work, of what we have learned about ourselves as learners. Students who were a little concerned were convinced by their peers that they are good and ready…that they have got this! Will there be blunders and mishaps tomorrow? Most probably but I am confident the students will roll with it.

Student Led Conferences should NOT panic the teacher! They should EMPOWER the student! They should be a time the classroom teacher is in awe of their incredible class of students. A time where classroom teachers are amazed at the learning that has happened…and some that hasn’t but that has led to a self awareness of what needs to come next! Student Led Conferences should be a HIGHLIGHT for the school year where teachers and students are so proud of the year that has been so far and students are celebrated and praised for their ENTIRE journey! Fingers crossed that tomorrow is the day of celebrations that my inspiring group of learners deserve!

19 tally marks in my notebook.

That’s the number of times the word “management / managing” was used in a 30 minute meeting to describe a student of concern.

I rushed to my desk with angry tears and clamored to pull up Rita Pierson’s, “Every kid needs a champion“. This is my strategy for dealing with the silenced rebel in my head; assurance that my thoughts and perspective is not unique. I am not alone.

After Rita, I looked up the definition of management.

The process of dealing with or controlling things or people. Synonyms: dominate, maintain, regulate, oversee, handle.

Call me crazy, but none of those words would be my choice to associate with students, learners or education. Certainly not words I would associate with agency in the context of learning.

Sometimes I just wish I could scream in frustration at the irony seeping through disguised as “here for the kids”, and “in (insert student name)’s best interest”.

What if instead of “managing students” we shifted our mindset to “advocating for learners”?

What if we advocated for our learner’s roles, rights and responsibilities instead of trying to “manage” them?

What if we focused our energy on insisting our “problem” students become the best they can be?

Not what we can (choose management synonym: dominate, maintain, regulate, oversee, handle) them to be.

Some learners will not fit our predetermined mold or our idea of a “traditional student”.

What if instead of trying to control them to fit our boxes, labels and expectations- we advocated for them to be…. them.

The best version they can be- of them.