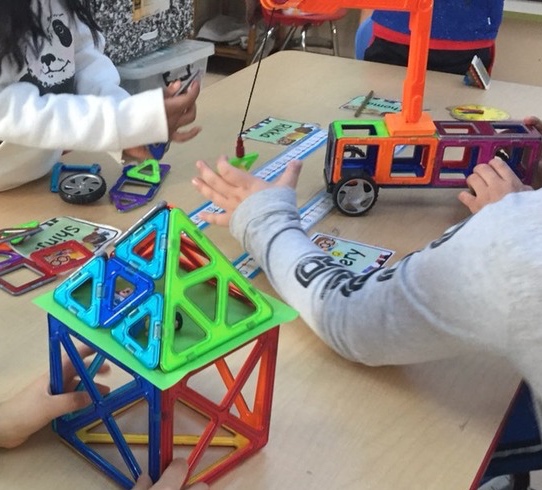 We open up and create, fully in the moment, not excluding anything, but fully focused on the unfolding crisis we are creating on the table top. First the building, then the fire, the rescue and the rebuilding. Themes of desperation, courage, fear, and hope.  Four boys and one adult are playing with magformer blocks, wooden blocks, lego figures and paper. Spontaneous, enjoyable, sustained and engaging. Imaginative improvisation. No rules, except those that support the safe classroom environment of Kindergarten free flow, play centres.

The previous description is what came to mind when asked to reflect on a time when I experienced, “playing in the in-between” at the workshop, Exploring International Mindedness through “Playing in the In-between,” during the IB Global Conference. I learned there that the “in-between” arises when adults and children play together in the way described by Cynthia à Beckett. Praglin defines “In-between” as “a meeting-ground of potentiality and authenticity, located neither within the self nor in the world of political and economic affairs. In this space, one finds the most authentic and creative aspects of our personal and communal existence. . .”  It as a focus upon relationships that resonated with me due to my previous work with nonviolent communication (NVC.)

This group of boys from my example, often complained about each other. They could be described as, “Frenemies.” Two of the boys often attempted to dominate the others to play to their individual ideas, scripts, and outcomes. This often led to periodic conflict, and complaints, like, “Why is he the boss?” and “I don’t want to go to school.”  I would say, “Can you make it so everyone has fun?” Easier said, than done.

When I truly join in the play, like the time I reflected upon, everything changes and it, seemingly effortlessly, becomes fun for everyone.  When I implore, counsel, and plead for fair play nothing much changes, at least not quickly.   When I truly play in the In-between then everything changes. I am grateful to Dr. Cynthia à Beckett  for reframing these sometimes, seemingly insignificant play times for the wonderful connecting moments that they truly are for children and adults.

What makes these moments of “playing in the In-between” really that important?  They feel significant and they leave a trace afterwards. They matter for the relationship. They matter for individual development of many attributes of the IB learner profile. They strengthen connection, gather polarities and hold opposition lovingly. In my example the children involved asked to play the scenario out again for the next four days.  It become more and more elaborate and involved a rotating cast of participants.

When have you experienced “playing in the In-between?”  I would love to hear your stories! And what about play in education?  Play is a big topic that needs more unpacking. What do you think?